As water temperatures drop, leaves change color, and daylight decreases, we know our open-water fishing season is quickly wrapping up.

But those willing to keep the boat out of storage will encounter some of Minnesota’s finest walleye fishing.

The remaining weeks of autumn qualify as “shooting-fish-in-a-barrel” season. The finicky, dormant walleyes of September know ice is approaching, and their internal clocks are telling them to eat.

No more force-feeding these fish. They’re aggressive and willing participants as long as you know where to look on a given system.

Many bigger bodies of water with a lot of depth often feature sharp shoreline breaks, too – so sharp that they’re difficult to fish effectively.

Often, deep water surrounds this structure, and depending on the time of day, walleyes may be on top, the sides, or well off the structure.

It’s not uncommon to find fall walleyes as deep as 40 feet or more during midday hours on these big lakes. They might also be sitting on the edge – somewhere in the 15- to 25-foot range, depending on the lake. But they typically aren’t far away from a piece of structure, which they’ll also use early and late each day.

More times than not, these fish aren’t spread out, but concentrated on a specific feature such as a sharp turn on a deep piece of structure. It almost acts like a wall, ultimately holding these fish up and forcing them to stay put and feed. 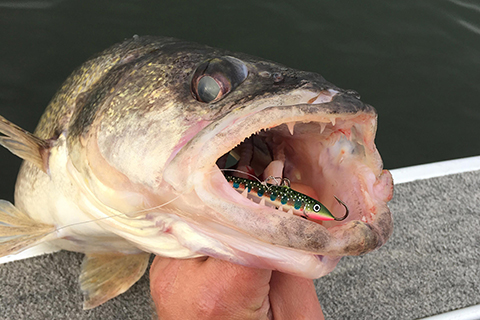 This 27-inch walleye gobbled up a No. 7 Jigging Rap. photo by Jason Revermann

Trust your electronics and look before you fish. Think vertical, sit over them, and work heavy jigs tipped with minnows and plastics or some type of horizontal bait such as a Jiggin’ Rap, Shiver Minnow, Rippin’ Rap, or blade bait.

As the sun sets and rises and these walleyes slide up to chew, trolling crankbaits is a fine fall approach. Many lakes will produce walleyes over deep water during the day and in less than 10 feet during low-light periods.

Shallow, fertile lakes can provide stellar fall walleye action. They’re also much easier to work since these fish have fewer areas to roam.

Structure can be minimal on these smaller lakes, which means you need to key on shorelines, remaining weed edges, and small flats or bars.

An abundance of forage in the way of minnows, dime-size panfish, and even migrating frogs provides a smorgasbord of food along shallow shoreline breaks or weedlines, and walleyes are there taking advantage of it all.

Work gradual breaks and mid-depth weedlines, rarely in more than 12 or 14 feet. Pitch a jig and minnow or crankbaits toward the shore or shallow weed edge and work it back, especially in wind-driven areas. You can pull a bunch of walleyes from less than 5 feet of water this time of year.

Knowing that forage stacks in shallow water on many lakes during the fall, there also are opportunities to keep the boat at home and shore-fish.

Channels, current areas, bridges, and even docks will hold walleyes, especially during low-light periods. They don’t all hold fish, so expect some trial and error, but with some looking, you’ll find a few autumn honey holes.

Don’t look past the obvious. Locate fish … and they’ll bite!

For more tips from Glenn Schmitt check out the pages of Outdoor News.

View all posts by: Glen Schmitt