As catch and release becomes more popular, it is important to stress proper fish handling to ensure that we release fish alive to reproduce and fight another day.

With enforced slot limits on more and more lakes, you are sure to have to release some of the fish you catch.

First, having the proper rod, reel, and line will allow you to have a quick fight to put the fish under the least stress possible. 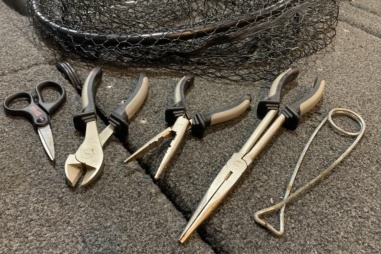 Next, having a proper net will allow you to scoop up a fighting fish instead of completely wearing it out.  Remember to wet your hands before handling a fish to prevent removing too much of the natural slime from the fish.

Have a couple of needle-nosed pliers and or forceps to get at those hard-to-reach hooks. A jaw spreader can also come in handy when dealing with those toothy critters. A high-quality hook cutter is also a great investment for salvaging foul-hooked fish. You’ll want to cut off hooks rather than tearing them out and causing extreme or – more likely – fatal damage when you deep-hook fish in the throat, in the gills, or around the eyes.

If taking pictures, make it quick! Have your camera ready and keep a firm grip on the fish to avoid dropping it.

Large fish require extra special care to avoid incidental damage to the mouth, gills, and internal organs. Hold trophy caliber fish in a horizontal position using one hand to hold either the mouth or gill plate and the other to support the fish’s belly. Never hold a fish by its eyes and avoid sticking your fingers into the gills.

When you actually release the fish, hold it upright allowing water to flow into the fish’s mouth and out the gills. Never grab a fish by the tail, and push it forward and backward to revive it. Gills are a one-way valve, so it’s unnatural for water to run over them this way and can do more harm than good. Instead, muskie fishermen will revive big fish by holding them steady and pulling water over their face with one hand.

Please use these steps to be a more responsible angler so everyone can enjoy this amazing resource for years to come.