Spring fishing tip: Head to a local river or stream to catch some carp and suckers 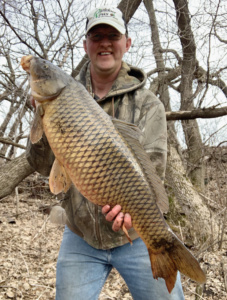 Beat “stay-in-place”-induced cabin fever by targeting rough fish in a hard-running river near you.

Some of my first fishing memories are of digging worms, grabbing a rod and reel, some heavy sinkers, a few hooks, and then biking down to the local river to catch carp and suckers with my brothers. This entertained us and kept us busy many spring days during our childhood. We caught and released tons of fish back then and almost every time, at least one giant carp over-powered our under-sized gear. The “one that got away” left us coming back for more!

In recent years I’ve spent less time chasing rough fish, but hooking into a giant carp in a strong flowing river is still a rush. With river fishing, you never really know what you’re going to catch on the next hook-set. Usually we catch carp, suckers, and catfish, but rivers hold many species of fish willing to eat worms.

Finding areas to catch carp and suckers usually isn’t too difficult. Usually when most of the snow has melted and rivers are flowing full, we can find carp and suckers along current seams before outside turns in the river or other current seams along irregularities in the river bank like bays or trees. Carp spawn in flooded muddy bays on river systems and will hang along the current seams just outside these areas until that water warms. Suckers tend to spawn in gravel or sandy areas with less current.

Once the water starts to warm, the bite usually begins. Our old school method of knowing when we could go fishing was when we could dig in the garden and find worms. If the ground was too cold to find worms then we had no bait. Today I either wait until I can pick nightcrawlers on a warm spring evening or purchase them from a local bait shop. 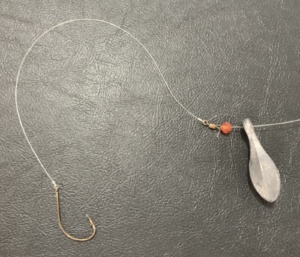 Rough fish gear is pretty easy. My basic setup is at least a 61/2-foot medium-heavy to heavy rod, a 2000 series or larger reel spooled with at least 10-pound line. Then put a 1- to 2-ounce slip sinker on the line above a swivel and around a 1-foot leader to a heavy hook large enough to hold a wad of nightcrawler or worms. Some anglers use corn, bread balls, or create a concoction of flavors for their own bait. I grew up using angle worms from the garden but now prefer nightcrawlers. They stay on the hook a little better.

Find a spot on the bank free from trees where you can cast out along a current seam. Allow the sinker to settle on the bottom and tighten the line enough to detect a bite. You can hold the rod or place it in a rod holder and watch the tip for a bite.

When the fish are aggressive they will suck in the worm and run, but usually they are just pecking at it. Give them time to take the bait before setting the hook.

Once you set the hook the fight is on. Bear down to keep them from getting out in the heavy current or running into trees. Heavier gear will allow you to fight these fish faster and give you a better chance to land them.

Enjoying the great outdoors can give you a much needed break from sitting in the house especially this year. Carp and sucker can also make for solid table fare, especially when smoked.

Good luck fishing and stay safe out there!