If game fish seasons have closed in your area and you still crave the tug of a big fish, then head on down to a nearby river and try your luck on some rough fish. Carp, suckers and catfish swim most rivers and will put up a great fight.

It doesn’t take much for gear to target rough fish. A fairly heavy rod, with a larger sized reel with 10- to 30-pound line, a few slip sinkers, some octopus style hooks, and some night crawlers is all you need.

All of this gear can vary depending on the size of the river, current, and the size of fish you’ll be catching. 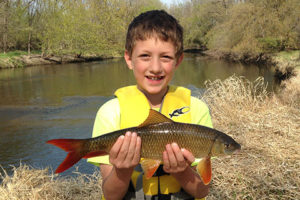 JPT member, Brad Revermann enjoyed fishing on the Sauk River with his family.

Anglers who target rough fish on a regular basis may have a pretty complex setup. I use some of my heavier walleye gear and it works fine. My basic setup is a 6 1/2-foot medium heavy rod with a 2000 series reel laced with 20-pound braid down to a 1-ounce slip sinker with a swivel and an 18-inch snell of 20-pound fluorocarbon and a 2/0 sized hook baited with night crawlers.

Add beads, floats, no-roll sinkers, droppers and all sorts of stuff if you would like. I basically use a heavy duty live-bait rig, and it has performed well for me.

When searching for a good location to target rough fish, find bends in the river. There is generally a current seam right before the bend on the outside curve of the river and usually slack water with little to no current. Position yourself upstream and cast right along this current seam, then reel up any slack line before your sinker is swept downriver into a snag. Most rivers are filled with rocks, logs, and other various items to snag on so you’ll want the sinker and hook to move as little as possible from where you initially casted. You will most likely find some snags and areas to avoid. 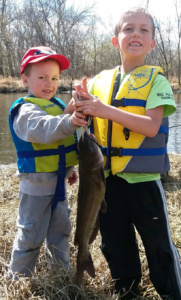 Either hold your rod and wait for a bite or place your rod into a rod holder paying close attention to the tip of the rod for any action. When they hit the bait, let them take it for a few seconds, then set the hook. The fight is on.

I have great memories of roughfishing when I was younger. My brothers and I would get home from school, dig a bunch of worms out of the garden, and bike down to the local river and spend hours catching carp and suckers. Back then our gear wasn’t quite as sophisticated, and we hooked a lot of fish that escaped.

We were targeting rough fish and throwing them all back. Most people just didn’t understand why we kept going back to catch these fish with no intention of keeping anything. “The tug is the drug!”

Get out there and target some rough fish! Good luck fishing!