First ice is kind of like opening day for open-water walleye anglers. You mostly must rely on last year’s experiences. That’s how I start. I’ll use lures that provided success in the past, but I also always have two or three other rods rigged up with alternate offerings. Second, I always drop down a live minnow on a rattle reel, tip-up, or a dead stick. Fatheads, shiners, rainbows, and suckers are good options.

My first goal is to contact fish, so I jig aggressively with large spoons and minnow profile baits that create a lot of sound, vibration, and flash in the water column. You want to attract fish from as far away as possible, but don’t overdo it. If a fish appears on your locator, slow down and give them an opportunity to strike. If they retreat, then accelerate your jigging. If faster jigging attracted them in the first place, it might take that aggressive approach to trigger a strike. 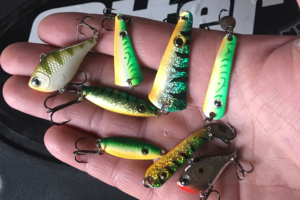 Lures with perch colors and patterns are at the top of my list for first ice ventures.

With spoons I start with the biggest sizes available. I will rip them up a foot or two and allow them to flutter back to the bottom. If fish approach, then quickly leave and won’t return, then I downsize.

When using minnow-profile baits with rattles such as the Rippin’ Rap, tone it down. You can rip them, but then back off to short lifts and a slow jigging cadence. If nothing shows up, give it another rip. A mistake I see many people make with these baits is fishing them too aggressively. If you can hear the rattles at the top of the ice, then the sound your lure emits is more of a deterrent than an attractant. Try one good rip, then slow it down. A light lift of 6 to 9 inches and then a slow jigging action will send out more than enough sound.

Give the fish what they want. Start aggressive and call them in, but then listen to their mood. In a future blog I will talk about using your electronic to read the mood of the fish.