Ice-fishing tip: Knowing when not to practice catch-and-release

I consider myself a strong advocate for catch-and-release fishing, although I occasionally keep a meal of fish. For me, fishing is more about the challenge of finding fish, then determining what triggers bites. I’d rather catch a bunch of fish and let them fight another day than always keep a limit.

The idea behind catch-and-release is to have fun catching fish, then release them to grow, reproduce, and survive for another angler. Sounds great and works great… most of the time. The problem I see with catch-and-release is when anglers target fish in deep water, especially crappies, perch, and walleyes. Pulling these species from depths greater than 30 feet often causes barotrauma. The change in the pressure on these fish can stun them, and they’ll struggle to return to their original depths. If they successfully descend, they can regain their composure and survive. But sometimes these fish barely reach the bottom of your hole, then they float back up or lodge against the bottom of the ice. 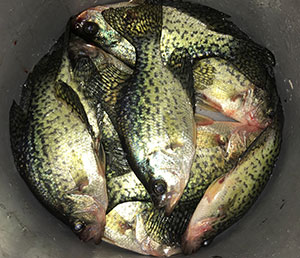 The other day I was working suspended crappies on a small lake. The fish were in 43 feet of water and suspended 25 to 35 feet down. After catching a few fish I noticed they were not re-submerging very well. Instead of throwing back stunned fish and leaving them dead under the ice, I kept a meal and quit angling. Some of these fish were small, but instead of sorting and upgrading and potentially wasting fish, I decided to wrap up.

Sometimes special regulations determine whether you can keep certain fish. In these cases I prefer not to target fish where I can’t release them easily. Resource agencies set regulations to protect fish populations, but sometimes we need to police ourselves and do what’s best for the future of the resource.