Finally, it was announced, and I was so excited to see that I had won. But I was also scared, as I had never hunted bears before. I had no clue what to expect when out in the woods hunting one of North America’s black bears. 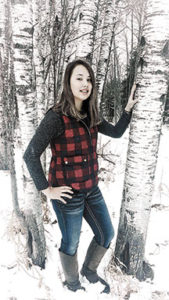 The first place my dad and I went to was the local gas station. There, we got my license and new batteries to set up the trail cameras.

I was ready to go out and set everything up. I wanted to clean the trails, put up the cameras, and set up the bait stations, but my dad told me to slow down, because we would get to all of that when the time was right.

When my dad and I got home from the gas station, we went online and pinpointed where my bear stations would be and made sure that all of the trail cameras were in working order – I mean it is always fun to see what went to your bait.

Four days later, my dad and I cleared the trails to the bear stands. Then we cleared the shooting lanes so as to ensure I could get a clear shot if a big bear came out. Or, in my dad’s words, I would “drop the hammer.”

We also dug the holes to put the beat bait in, and we got logs to put over the bear baits. You can’t make it that easy on them – you’ve got to give them a challenge, right?

A couple weeks later, I started to get my bait ready that I got from the amazing “Lucky 7 Bear Bait.” I made the perfect concoction for the bears to come rolling in – nuts, gummies, and nonalcoholic margarita mix. It smelled so good; it just made me want to eat it.

So I went out to my stand with all the supplies – my bait, signs, and trail cameras. The first thing I did was set up the trail camera to make sure it was in just the right spot to get the best picture of the bear. After that, I put the bait in the 4-foot hole my dad and I had dug. I covered the hole with logs and then hung up my sign to show people that this area was taken and that this was my bait station.

I checked my bear bait every two days, and the first two weeks that I started to bait, I did not even get a single hit, which made me kind of discouraged.

The week after that, I finally got a hit and I was so excited to go home and to see my bear on the computer.

Now came the time I could sit in the stand and maybe drop the hammer on that black bear I’d been stalking and baiting.

I sat the whole bear season, and although I did not see the bear, I saw so much other wildlife. It was cool to sit in the stand with all the animals around you – they don’t know that you’re there, and you get to admire nature and be in the great outdoors.

There were many cool things in the woods. There was this porcupine that always climbed in the tree right next to me, and he was with me from the moment I got in the stand to the moment I left. He was my stand buddy, and he made sure I was never lonely or bored.

There were plenty of other animals, too. I saw a rabbit, and my favorite, the squirrels. Who doesn’t love when a squirrel comes hopping through the woods, and you think it is something big, but no, it’s a squirrel scaring the crap out of you?

I also heard plenty of ducks and geese fly over and got to hear the wings of the ducks. They sounded like an airplane.

And the sound of the swans running on the water, and the sound of geese calling to each other from lake to lake. Then creeping through the wood was a grouse, and he was right under me. It was so cool to see it sit there, not knowing I was even there.

I sat there for weeks, waiting for my trophy of a bear to come in, and I never even got to take a shot. But it was a great experience, seeing all the wildlife and to be in the great outdoors. I mean, I am only 16; the bears will be there for years to come, and I will get my trophy one day.

View all posts by: jrproteam